Spring brings out the optimist in all of us, right? With that in mind, I set out on today’s Tour De Hood, looking for the best in all I rode by. (That’s the Sprocket to which this blog post refers.)

Herewith, some of the treats that  I took as signs of Detroit’s revivification. (By the way, the Detroit Free Press had a lengthy article detailing big plans for returning Detroit to its rightful spot as the Paris of the Midwest.)

I noticed a number of new tags on various buildings, abutments, and other objects. This wall, for example, was tag-free last year.

Hi-ho, Paid AAwaaaaaay. (Thanks to Kae V for the deciphering)

“Away” made a return visit (though in a much less artistic form) next to his or her new pals, EP & KBT.

Part of what used to be/is still a residential neighborhood seems to have rezoned itself as a truck stop. Last year there was only one truck here. The family’s growing. 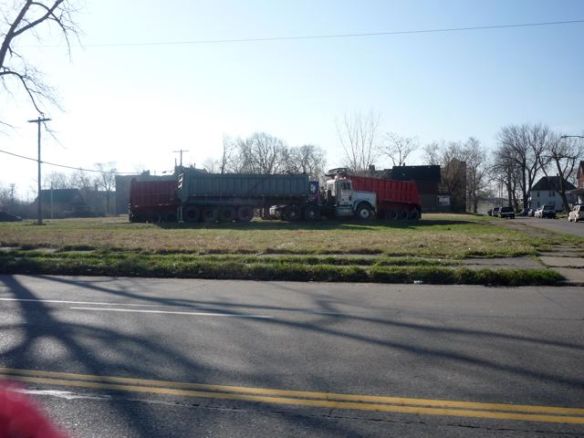 No homes on the block = more space for your semi

I also cycled by a formerly-standing abandoned house. It has dedicated itself to a new Detroit by ceasing to be.

For those of you familiar with my end-of 2009 post, I discovered a 23-hour tire(s) repair shop on Kercheval. The owner has spruced up the storefront by painting it a lovely shade of purple. (The sign itself could still use some fixing, if you ask me.) 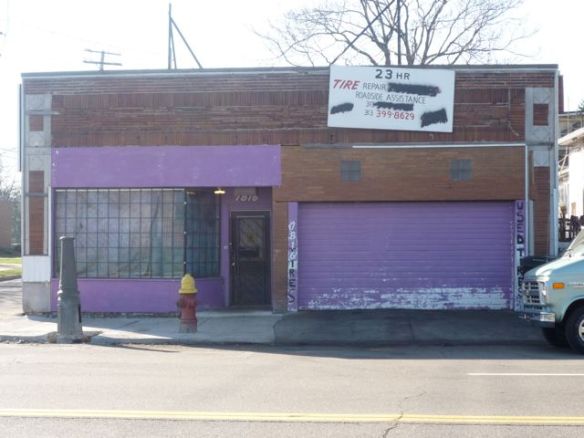 Perhaps Easter Sunday is included in the hours it’s closed

The following photo may not look like “new” to the casual viewer, but last year, it didn’t have a roof, so we’re moving forward with purpose and vigor. 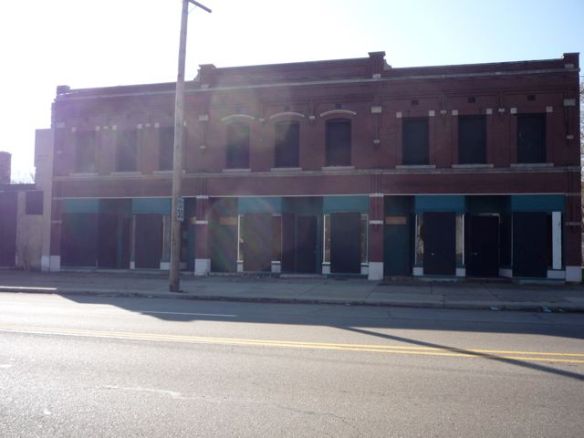 New to me, but not to Detroit, a coaling (?) stop on the Grand Trunk Railroad. (Information, courtesy the Legal Eagle).

There’s a little bit left of the track that marked the coaling station itself. There’s nearly a foot left of old track.

For those of you looking to increase your carbon footprint, there are chunks of the actual carboniferous object itself for your personal collection:

What naughty children used to get for Christmas

The Dequindre cut has a number of actual, new new features for 2010. First, it now extends all the way to Atwater Street – which is nice. It’s currently “blocked” by orange-and-white barrels and some kind of plastic netting, but no one appears to be letting that slow them down. There are also some new examples of street art over which to marvel. One, a more traditional language-based style:

The other is of the figurative variety.  I don’t know if this is a “curated” example, or some interloper’s work.

There’s a wall standing alone in a field off of Grand River.  I could’ve ridden past many places today; but coincidentally, (it being Easter Sunday), I happened upon this mural.It has been newly-decorated with a bunch of bunnies. Awww. 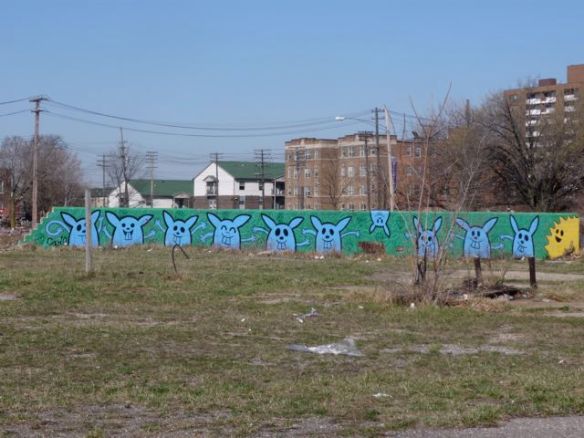 Suspicious-looking “bunny” on the right, no?

The Michigan Central Station is one of Detroit’s most iconic ruins. There seems to be some noise about turning it into something – I have no idea what – but I think my Tour De Hood Chronicles wouldn’t be complete without tossing in a photo of one set of its broken windows. (That makes this photo new to the Tour De Hood archives:)

Maybe someone recycled that glass

In a plea for government help, someone has painted the President’s name on the curb outside the razor wire. (I haven’t heard whether it’s had its intended effect or not). 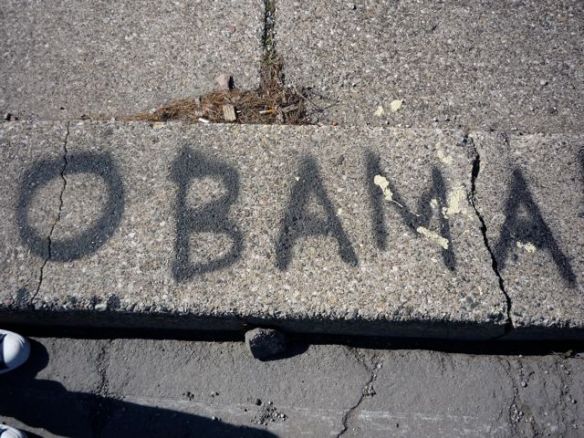 A venerable pawn shop has given up the ghost. (The license is available). So if you’re looking for a rifle or diamonds to pawn, you may have to search elsewhere. 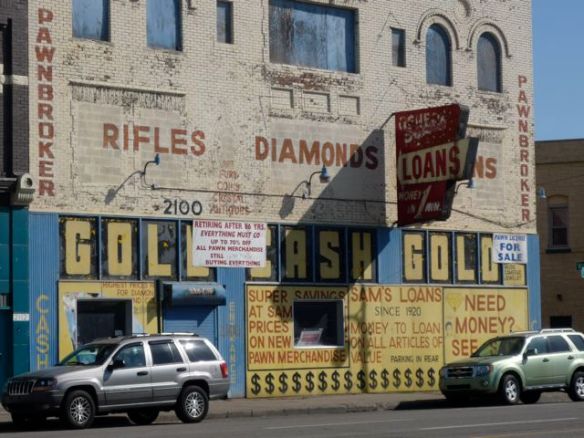 Four score and six years ago, our forefathers brought forth on this continent a new pawn shop. Now it’s no more

Directly across the street, I spotted a mural “advertising” Corktown, an historically Irish neighborhood. Nothing about the mural strikes me as redolent of Eire, but it could be because I’m ignorant of Celctic traditions. Or something. Judge for yourself. 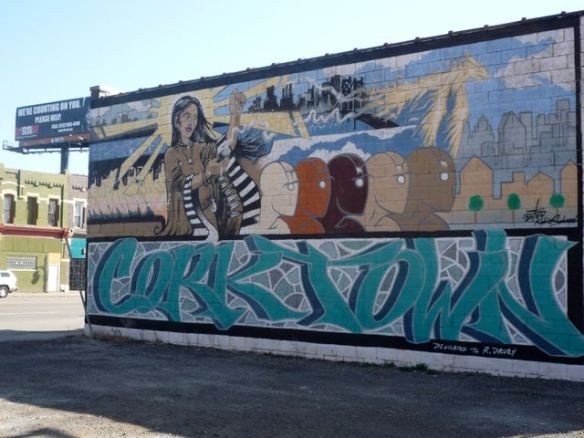 One thing about Detroit businesses, when they fail, they fail. Here, a formerly going concern of some kind that is definitively done. Put a fork in it.

Anyway, this being Easter and all, perhaps a benevolent higher being will resurrect the establishment to the wonder and delight of all. Here’s hoping.

Thanks to The Legal Eagle for the History Lesson, and for Spencer’s accompaniment. Yo! Spencer! 28 miles!

A little poem to celebrate the arrival of spring:

but keeping is downward and doubting and never

I had to work this weekend, and couldn’t get in a ride. To keep your appetite for exciting TDH news at bay, here’s a 2009 contender for pothole of the year.

Back soon with more exciting photos of my fair city.

The streets of Detroit never fail to amaze. Here, for example, is a stretch of “curb”.  This has to be one of those “give the contract to my pal who’s never poured an inch of concrete in his life” deals. You can tell from the few bits that haven’t collapsed that it’s a pretty new curb. Just totally crappy work.

Lest you think all was grim on the TDH today, let me quash that bad vibe. I noticed a sign of hope on an otherwise empty building.

I passed by a parking lot that stopped me in my pedals. I’ve passed by it a number of times, but had never noticed the collection of bitchin’ Motown Metal before. This purple Caddy, for example:

Cadillac in a Cadillac Color

Well, it turns out that it wasn’t something I had missed before. (Or, as my wife is fond of pointing out, “You’re smarter than you look.”) The vehicles in the lot were assembled for a MOVIE PRODUCTION. If you didn’t know, Detroit is fast becoming the Rust Belt Film Capital, thanks to some nifty tax advantages offered in desperation by the state to lure business – any business – to our Water Winter Wonderland, as our License Plates used to claim.

I did pass a lovely garden of Irises on Cass Avenue.

It turns out this flower patch has a vegetable portion as well, and is, in fact, part of a part of the city I’d never known existed before: 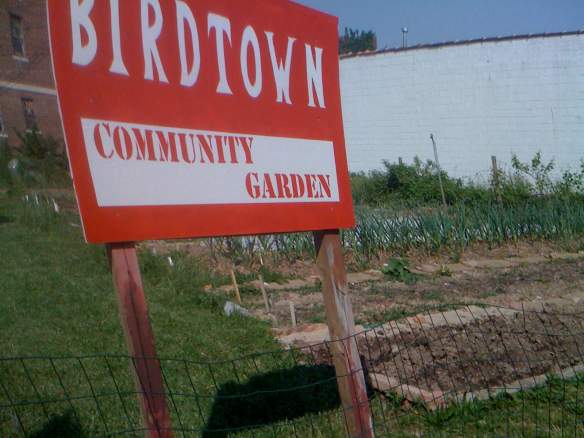 On the return portion of today’s ride, I chose to go down on John R (yes, that’s the name of the street, for you out-of-towners) because it’s very nicely paved. I saw a building that must have been bursting with joy and hope when it was first opened:

If I remember my Roman Numerals correctly, this was dedicated in 1898. To much civic pride, I imagine.  I wonder if they had any Spanish Flu victims twenty years later. Anyway, it’s boarded up now, much to my chagrin.  More tomorrow.

I think maybe the spectacular weather today acted like a hallucinogen on Mister Arthur’s old bean. Despite the poverty, abandonment, ruins, burned down houses, weeds, broken glass, giant (and growing!) potholes etc., etc., I was in a very good mood – and actually saw some nice things.  First, a little glimpse of the townhomes designed by Mies Van Der Rohe – really ultra cool modern living in the heart of the hood. Toby Barlow wrote about his place in the New York Times, and Keira Alexander’s place was featured on the January cover of Dwell magazine.  Here’s a lousy shot of some of them. If I were single, I’d live in one of these in a heartbeat.

Detroit actually looked almost like a real city this morning, as there were live human beings gathering together to watch the Tigers play the Cleveland Indians. See? A “crowd” of people!

Detroit is famous (or infamous) for its statue of Joe Louis’ fist.  I like it, though it appears to frighten out-of-towners.  It is less famous for this sculpture thing, which, until today, I had assumed to be a salute to the Carp, the fish that defines the Detroit River and adjacent Lake St Clair.

It turns out it’s The Millennium Bell. I’ve never heard it being rung, so I stepped under it and struck the hanging-down bit with my knuckles.  It does ring.  In my book, though, it makes a better fish tribute.

I also rode by this lovely building, which, despite its exterior attractiveness, appears to be unleased.  That’s too bad.

An amiable fellow who looked as if he lives on the street across from it told me it’s being torn down. “To make room,” he said.  “For what?”, I asked, as there was nothing that appeared to be headed in its direction. “Room for nothing”, he said, “It’s those idiots on the City Council.”  Ah, Detroit, when will be bad juju be gone?

Back on the Tour De Hood. It’s officially Spring, and Detroit is awakening from its gentle winter slumber. Let’s see what’s happened over the winter.

I noticed some newly burned-out houses this morning. (That is to say, I don’t remember them being burned out last year). Here’s a sample of what I found.

This charming barn-ish fixer-upper has a mostly intact roof, some paint left on the outside, and part of a fence.  Ready to re-make into a Tribeca-Style loft for the right buyer. Church & schools nearby. Some streetlights. 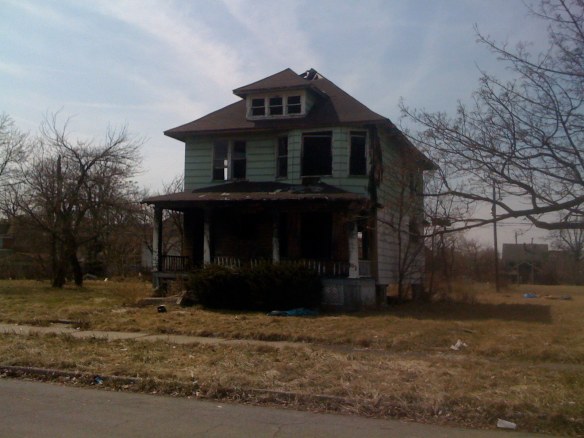 This two-tone, two-story beauty has room for your growing family! Set in a park-like atmosphere, it has beautiful original landscaping. Hole in the peak of the roof could mark the beginning of a very nice skylight. Owner motivated!

Real rental possibilities abound in this semi-not-destroyed duplex.  Live downstairs while you clear out the fire damage up top. Most windows are still intact. Plywood covers can be re-purposed to help mend second floor. Nice big yard for cookouts and entertaining. Recent price re-adjustment.

Retail, retail, retail. Think of the opportunities to establish a luxe, upscale retailer here! No competition of any kind. Plenty of free parking. Start from scratch to build your dream store. Roof a problem.

Ah well.  Just to keep myself from breaking into tears, I stopped at Good Girls Go To Paris and had a super yummy banana and Nutella crepe.  Here’s proof.

That’s all for now. I hope that next week some spring weeds will begin to show their pretty little heads in some of the abandoned lots along the TDH route.

* Props to composer and lyricist, Tommy Wolf and Fran Landesman