On the eastern end, I rode by the Swanson Funeral Home. The building may look as if it’s squished to fit a format, but not so. It’s just built that way. Here’s the interesting thing about it (aside from the fact that it’s celebrating its 50th anniversary).  They used to have a really cool Packard flower car, which I couldn’t find in the parking lot this morning. I asked a very pleasant gentleman about it, who couldn’t remember it, but did tell me that they do have a LaSalle Hearse from the ’30s, which they use for special funerals, most notably for that of Rosa Parks.

Grand Blvd used to be truly grand – but much of it is a mess, and it gets pretty grim by the time it swings north across I-94.

Here’s a partial truck for sale. Don’t know if there’s enough of it left to qualify for our new national clunker program.

One abandoned building caught my eye.  I couldn’t figure out exactly what its original purpose was, and the sign on the front didn’t help.

I’ve asked my cousin Paul to weigh in on what these signs actually mean. (He’s an attorney in addition to being a great guy). * please see below for his pov.

Glad they added the hand-written bits

More mystifying was the value ascribed to it ($31,200,000 in “lawful money”), as it is essentially an empty building with what looks like a crack house for a neighbor.

And they say housing prices in Detroit are falling

A little further on, East Grand Blvd becomes, temporarily “General Motors Blvd”, even though GM took off for the Renaissance Center years ago.

One of the buildings has been turned into the “Chap Lofts”.  I don’t know if this is an attempted tie-in with Ralph Lauren, or a slyly-worded invitation to limit its occupants to homosexual expats from Britain.

Nowhere near the playing fields of Eton

I once had the opportunity to see James Brown live on his 5oth birthday at the then-named Latin Quarter club. Big dope that I am, I didn’t go. But even the Godfather of Soul couldn’t keep the club going. It changed its name  – no help.

We have a famously incompetent (not to mention corrupt) City Council here in Detroit. One of the more notorious nitwits on the Council is Martha Reeves. (Yes that Martha Reeves). Put bluntly, she’s an idiot.  Marquita Reese  would’ve been a much better choice, no matter how inexpertly painted her campaign “slogan”.

You’ll notice a sign in the upper right (The Whole Why World). It was put up by the “Secret Pizza Party”, a clump of artists that made a name for themselves a couple of years ago, but who appear to have disbanded and moved to Brooklyn. They were the same group responsible for the sign I spotted earlier this summer.

Once past Woodward,  General Motors Blvd is renamed “Berry Gordy, Jr. Blvd”, in honor of the founder of Motown Records and the home of “Hitsville, USA”. I didn’t take a picture of it, because there are plenty of them around. Everyone should go visit the museum. Buy a copy of “Standing in the Shadows of Motown” before you visit.

Should be famous United Sound Systems

Why should you care? According to Metro Times, from an article written in 2004,

A short list of essential United sessions over the years includes John Lee Hooker’s seminal side “Boogie Chillen,” cut in 1948. A year earlier Miles Davis, Charlie Parker, and Max Roach cut “Klaunstance” for Savoy Records. Marv Johnson and Berry Gordy recorded “Come to Me,” the first release for what would evolve into The Sound of Young America and the juggernaut Motown label in 1958. Darrell Banks recorded his stunning soul masterpiece “Our Love” there in 1966. Marvin Gaye recorded tracks for “What’s Going On” in 1970. The MC5 recorded “Lookin’ At You” there, and Funkadelic, a band that helped give rise to both techno and hip hop, recorded almost everything they ever did at United. Aretha Franklin, Isaac Hayes, The Rolling Stones, and Hillel Slovak-era Red Hot Chili Peppers all recorded within these walls.

Marvin Gaye’s tracks for “What’s Going On” by themselves ought to qualify the structure to be a National Monument.

Miles later, I had breakfast at the Lafayette Coney Island, arguably Detroit’s most famous restaurant. 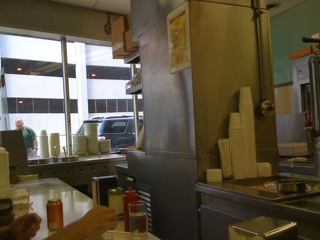 Nothing like two chili dogs for breakfast, I say. (Craig Snyder, you don’t know what you’re missing.)

Back in the day, the day, there was a Detroit Gang named, at least they thought, for the fearsome Corleone family. Some misunderstanding of the proper spelling, or perhaps overwhelmed by the smell of hot dogs, resulted in them naming themselves the Coney Oneys. Go figure.

* The rantings about UCC provisions is by a (insert legal term for nut case).  The other one is from a commercial mortgage that may be being foreclosed.

Think back to last January, when President Obama was inaugurated. Aretha Franklin made a lot of noise by sporting a unique chapeau, designed and built by Detroit’s own Mr. Song. Here’s Aretha in said hat, in case you’ve forgotten what it looked like: 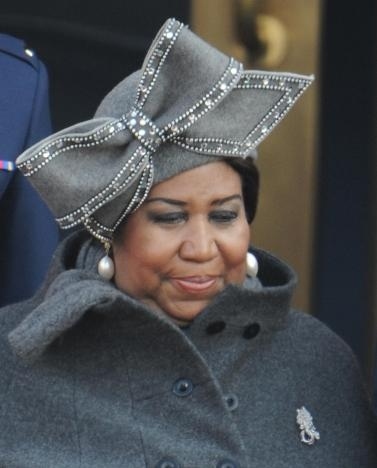 The Queen of Soul

Here’s where she got it: Mr. Song Millinery on Woodward near Grand Blvd. Detroit fashion rules. And don’t forget it.

I ‘discovered’ a truly unique building today. It’s on Baltimore near John R. It must’ve been a restaurant or something. A club? Meeting hall? Scientology testing lab? Whatever, it probably gets great mobile phone reception.

It’s for sale, but it’s been on the market so long the phone number on the “for sale” sign has been washed away, so I can’t hook you up with the seller. (You know you want to live here).

More typical of Detroit’s abandoned properties is this trashed apartment building near Wayne State University, which is named for “Mad Anthony” Wayne, a brigadier General under George Washington. (He died of gout, by the way).

No spaces available for rent

I’ve mentioned the Avalon Bakery many times before, but haven’t actually shown why I stop there regularly. Since you’ve all seen a cappuccino before, I thought I’d feature some of the baked treats on offer instead. Amazingly enough, I didn’t indulge today.

For reasons that escape me at present, I took Geology 101 whilst at University. I can’t remember much about it, except for plate tectonics and the shape of the silicon tetrahedron, basic building block of everything geological. (I think). After seeing this graffiti, I thought that perhaps one of my classmates tagged this wall:

Geologists in the hood?

I wish he or she had managed to not upend the Mercedes logo, and I’m not sure what the letters stand for, but I didn’t take any geology courses beyond that intro class.

More mysterious than the tetrahedron was this post-modern sentence I spotted on John R. Help me out folks, I don’t know what this means.

Back on earth, I also passed this temptingly-named restaurant:

The II in the name suggests there’s another Fire Water somewhere else in the city. I’ll have to keep an eye out for it. Maybe it’s the beginning of a new “casual dining” chain to take on Chili’s and Applebees.