The Legal Eagle and I hosted a guest on the Tour De Hood on the 19th of August, whom I will henceforth refer to as WCC(B). You’ll have to ask the Legal Eagle to explain the name; just remember, he’s a Legal EAGLE, and is not likely to say much.

The Tour covered some ground we’ve seen before on the TDH, offering up a simple ride round Detroit’s inner ring of beauty, Grand Blvd. We started off heading past John King Books, a great place for bibliophiles. 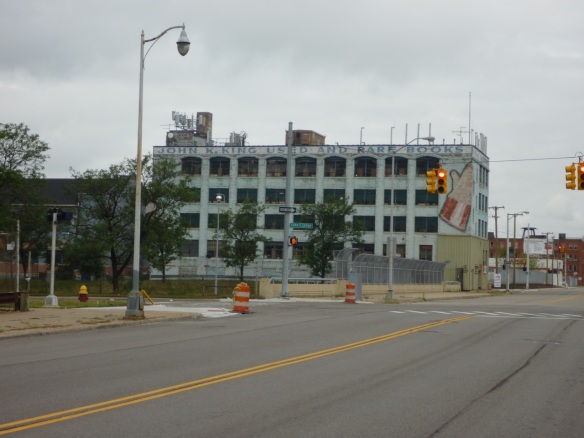 We then continued down Fort Street and took a slight detour to introduce the WCC(B) to Le Petit Zinc. The misterarthurs, en famille, had eaten there the night before. (I enjoyed a toothsome Salade Nicoise). Here’s a shot of LPZ  from the inside. 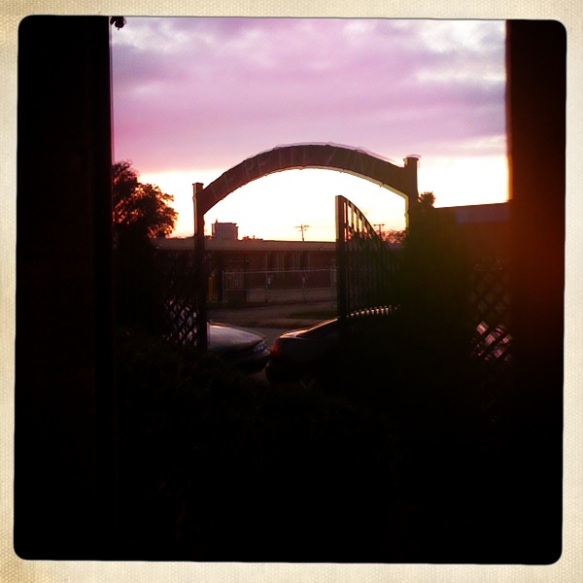 Le Petit Zinc. From the inside. Friday evening

Need something shredded? What better place to go than “Shred Me”?

Me Shred Good. You call. Me Shred

We introduced her to St. Anne’s (our most venerable Catholic parish), which I’ve written about before, but, fortunately, it being a Sunday, we were able to go in and look around before services started.  Here’s a shot toward the altar:

Our very own Pillar of the Earth

Here’s a tighter shot of one of the stained glass windows. It’s really a superb church.

Our next stop was the Detroit River end of Grand Blvd., at, appropriately enough, a less-than tidy park called, in a fit of civic inspiration, “Riverside Park”. We went there, not for the litter, but to show WCC(B) Detroit’s two unique bateaux (wait, I’m not at Le Petit Zinc anymore, make that boats): Our very own fireboat, (yes, it’s part of the Detroit Fire Department) as well as the JW Wescott II, the only mailboat in the country that delivers mails to passing ships. Isn’t that cool?

The Wescott II even has its own zip code

I believe the Fireboat is named the Curtis Randolph

Along the way up Grand Blvd., we rode under this gaily (original definition) decorated underpass. If you’ve got anything taller than a van (like a car with a bike rack on the roof), I’d consider a detour. While perky, it’s very low.

The little underpass that couldn’t

I hate to bore my readers with yet another photo of the African Bead Museum, but it is an essential part of any Tour De Hood. We had to show it to the WCC(B) to make her initial ride complete. Here’s an effigy (scarecrow?) I haven’t shown before: 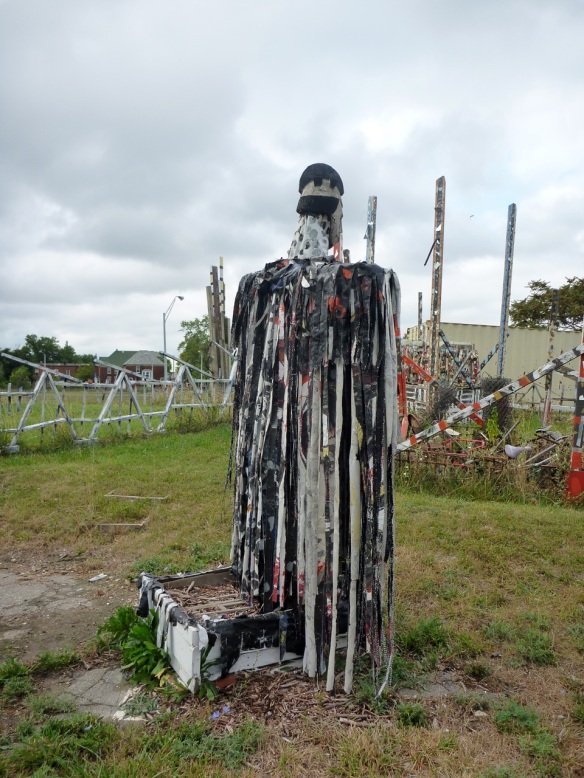 Welcome to the intersection of Grand Blvd and Grand River

There are many experts in the fields of urban planning and people friendly architecture. I wish someone in either field would weigh in on the relative goodness of welcoming you to high school (Northwestern) with what appears to be an antique example of Naval weaponry.

Damn the No Child Left Behind! Full class schedule ahead!

Here, someone is irritated with cyclists (can’t imagine why), and encourages racy behavior:

Any bike shop owners care to tell me exactly which part of my bike that is?

We made our mandatory stop at the Avalon Bakery, which was crowded with a clot of Wolverine club cyclists. This led the  WCC(B) to observe that road cycling appears to be the only amateur sport wherein the participants deem it necessary to kit themselves out with gear loaded with sponsor logos. Do runners do that? No. Golfers? No. And let’s not get into the it-seems-to-be-a-rule-that-you-have-to-wear-Spandex(r). (Well, she didn’t say all that, but the gist is accurate).

After a brief inside tour of the Guardian building, we went our separate ways. Back on Jefferson, I had to get a photo of another of Detroit’s sui generis fusion cuisine establishments. Scroll down through the past posts, and you’ll catch a shot of the “Asian Corn Beef” restaurant over on Wyoming.  Dr. Dre’s combo takes it to a whole other level. I leave you with this combo for your imagination to consider:

Saturday was my birthday, and what birthday would be complete without a spin through the hood?  The only possible answer is none. First, I ate some cake.  Chocolate cake is an excellent source of cycling nutrition.

It was a beautiful spring day in the Motor City.  Most of my route follows long straight lines, with as few stop lights or stop signs as possible. The only problem with this is that the streets in Woetown are laid out so that they point into, or away from, the prevailing winds. So one way will usually be into a headwind. Fortunately, I left going upwind, and came back with a nice breeze at my back. Along the way toward downtown, I spotted what I believe to be the opposite of a Prison Breakout – in this case, an attempted  Liquor Store break in.  Looks like those crafty thieves had to scarper before they made it into the store.

I like graffiti for the most part, but some of it is simply too difficult for me to decipher.  As an example, here’s some on the walls of the school where my mom used to teach: 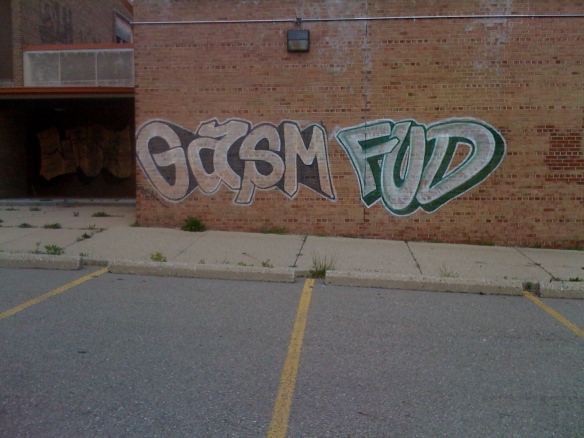 I’ve ridden down this street, (Kercheval) weekend after weekend after weekend, and for the first time, I noticed there’s a four-block stretch with real, antique, streetlights. I am positive these are not some do-gooder phony “olde worlde” lamps, but are simply never-been-replaced-because-the-city-is-broke-models. 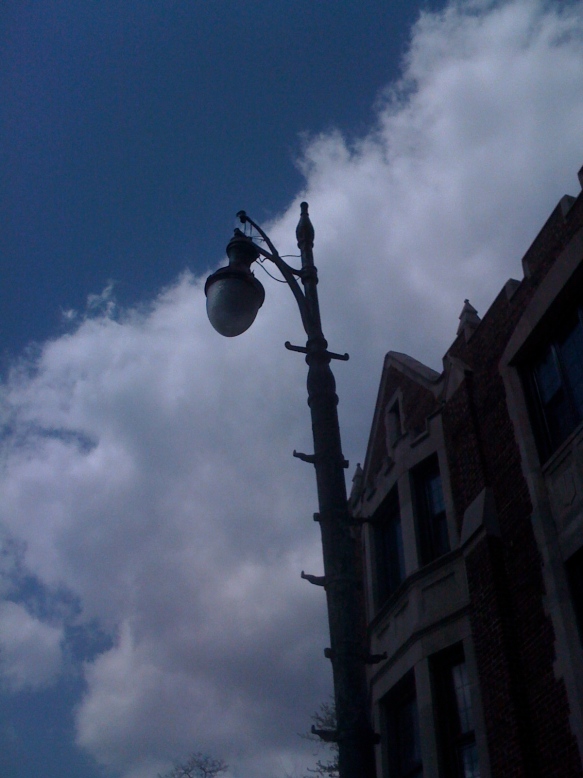 Finally, somebody tagged the asphalt path at the Dequindre Cut (the Greenways cycling project about which I’ve written before).

No, I don’t know what it means, either.  Anyway, lovely day in the hood.

I brought my wife’s mobile on the TDH on Saturday, because I felt I owed it to my loyal reader to show some photos of the not-quite completed Detroit RTT.
Here’s the landscaping I wrote about last week.

I know it doesn’t look like much yet, but it will by next spring.

I rode to the ‘end’ of the trail – which turns out to be at Gratiot. (It looks like they’re planning on lengthening it).

The real attraction is the tagging. I have a sneaky feeling (having seen some evidence to support this assertion) that the City is going to try to get rid of the graffiti. So enjoy these snaps before they’re power washed away. 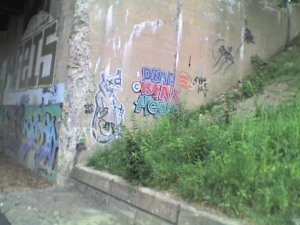 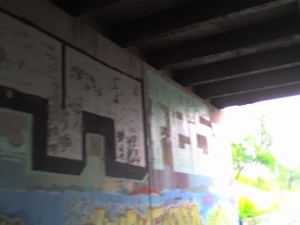 Anyway, if you want to check out the tags, I suggest you try and get down to the path ere long.