The weather last weekend was just delightful. Just gorgeous. Perfect for enjoying a spin ’round the East Side.

As you may know, Detroit is busily trying to shrink itself – the city’s too big for the population that lives here. The disastrous Detroit Public School system has issues as well. They’re trying to “right size” it, by closing more schools, adding to the abandoned ones you may have seen already on the blog.  Here’s a newly-closed one for sale or rent. It looks well built. 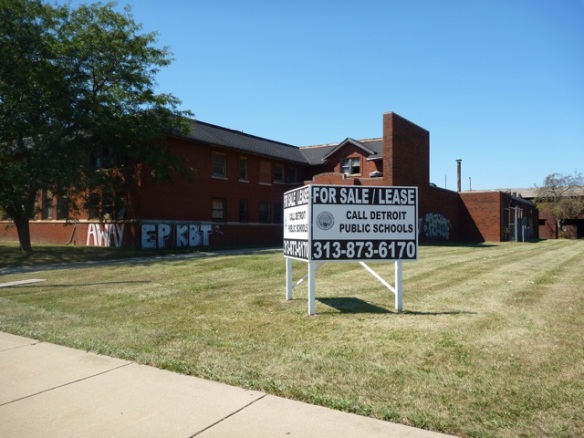 Be your own school marm – Kercheval and Beniteau

I began to notice there were a number of hyper local festivals going on. One on Kercheval near Coplin.  Given the fact that it was put up next to a liquor store, I couldn’t figure out what the occasion was.

A couple of minutes later, I passed some members of the Martin Luther King Marching Band waiting for a bus on Lafayette. When they told me they had just finished a performance it dawned on me: Saturday was the anniversary of Martin Luther King’s “I have a dream” speech.  (Yes, I know all about Glenn Beck’s tea-partyrama. Sigh).

The flugelhorn player’s sitting on the drummer’s drum

Moments later, I came upon the Episcopal Church of Grosse Pointe’s annual watercress and cucumber sandwich festival. Just kidding. There was a party in front of the Church of the Open Door. Line dancing to secular music. Kids having fun. Me taking photos. 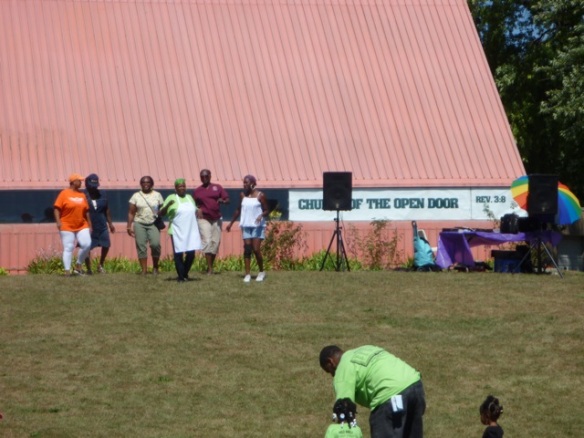 I have decided that my major dance impediment is a congenital inability to have my hips move independently from my thorax. Hence I always look like the most uptight guy in the room. I am not, unfortunately, the man with the four-way hips.

I am somewhat of an aficionado of “ghost signs” – elderly wall paintings of businesses or enterprises long since gone under. Here’s one for the former anchor of Detroit’s so-called “China Town”, Chung’s.

The “TE” could stand for TEmple, TEnnyson, or TErrace; I’m not sure which is correct

On a happier note, over on Cass and Alexandrine, Slows is (w00t!) opening up a Slow’s to go. I can’t wait for opening day.

On the way back, I chose to (egad!) ride the wrong way down one-way Second – and was rewarded for my illegal activity by the sight of this street art. I can’t decide: Man or Woman? I lean toward man – like a painted version of the emasculated Ken Doll. 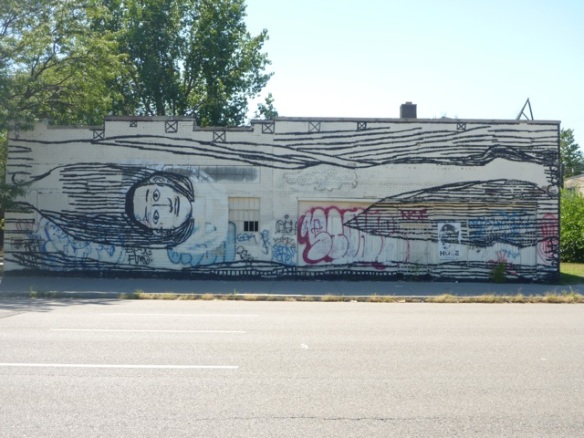 Here’s a blast from our printed past: “Michigan’s Fastest Growing Weekly” The Michigan Chronicle, an African American-centric newspaper, which you can now read online.

Then it was over to Belle Isle for the “Hear Bell Isle” event. The link will send you to Handmade Detroit – it was a fundraiser (donations accepted) for the Friends of Belle Isle.  I made it by in time to hear Maunder Minimum, and ran into Phil Laurie – he of the Detroit Lives blog, and tireless Detroit Promoter. I was hoping to see the hyper talented Angela Duncan, who claimed (via Facebook) that she would be in attendance, but no such luck.  Here, on stage, Maunder Minimum.

Finally, some good news for those who live near Indian Village. The ladder 14 fire station is about to re-open. They’re moving the Medic 12 vehicle from Jefferson and Lycaste, probably because the residential density along Kercheval is much higher.

Lovely day in the hood. Not a cloud in the sky, and there was only a gentle zephyr helping to speed me home.